With the help and mercy of God, Ang Dating Daan did not just celebrate another year in broadcast, but also in public service and in making an impact on people’s lives through numerous charitable works continuously upheld by the Members Church of God International (MCGI), the religious organization that produces the program.

Take a look at some of the program’s highlights and milestones in public service and broadcast throughout the years.

Blood donation drives are one of the main charitable events held by MCGI regularly. Bro. Eli, Ang Dating Daan host and MCGI Overall Servant, initiated the blood-letting activities since the 1990s. For these efforts, the group has been given various recognitions including the following:

Meanwhile, in July 2018, the National Trades Union Congress (NTUC) Health, a nursing home and senior care provider in Singapore, recognized MCGI as one of its active partners in organizing wellness activities for the elderly.

NTUC Health director Jeannie Ho previously extended her gratitude to MCGI, especially to Overall Servant Bro. Eli Soriano who always encourages Church members to volunteer for worthwhile causes. She addressed Bro. Eli in a message: “You have a lot of good people, you motivate them to serve, because [we’re] never too old to serve.” 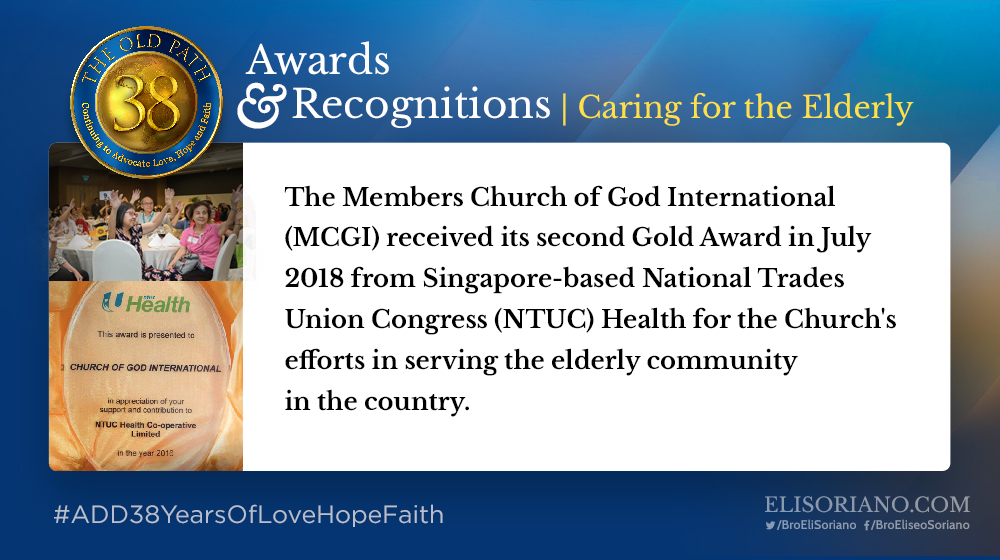 MCGI, alongside its media partner UNTV, was also awarded by the Filipino Community Council of Australia (FILCCA) in October 2016 for supporting the latter in its advocacies by organizing regular blood donation initiatives, clean-up drives, and visits to eldercare facilities in Australia.

Ang Dating Daan has also reaped awards and commendations throughout the years in broadcast since it first aired in 1980 as a 30-minute radio show in the Philippines.

Gawad Amerika is an independent award-giving group that recognizes the achievements of Filipino-Americans and outstanding Filipinos. It started as a civic organization called the “Gawad Amerika Foundation” founded by Charles Simbulan. Gawad Amerika is known and respected both in the Philippines and the United States for its commitment to community service.

Guinness World Records Adjudicator Fortuna Burke Melhem was present during the event held at the Smart-Araneta Coliseum to present the award.

In the event, Bro. Eli Soriano remarked: “We cannot serve God with our hands, but we can offer him the fruit of our lips, praising His name.”

To GOD be the glory!

Twitter
Previous StoryAng Dating Daan at 38: Charitable Works Through the Years
Next StoryCelebrating The Old Path’s History: 38 Years of Broadcasting the Words of God Worldwide